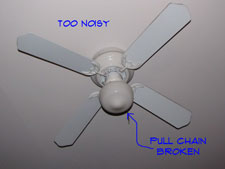 Removing a ceiling fan is a bit of a job. Your old fan will be heavy, so you might want some help for it. For related information, see the article 'How to Install a Ceiling Fan' and 'Ceiling Fan Troubleshooting'.

Shutting Off the Power

Shut off the power to the fan at the breaker box. Tag the breaker so that no one will turn it back on. Remember, electricity can be dangerous.

Ceiling fans are awkward to handle with the blades installed. The blades should have screws or bolts on the top side of the blade that goes down into a metal bracket that is attached to the fan motor.

Each blade will have three or four screws that hold it in place. Remove the blades one at a time. Save the screwes if you are planning on installing the fan somewhere else.

To help reduce the amount of weight you are dealing with and reduce the chance that you will break the fixture, it is a good idea to remove the globes and light bulbs from the fan. Usually these come apart similar to other light fixtures. They use thumb screws to hold the globes in place. The light bulbs should unscrew like a normal light bulb.

Loosen the screws to take the fan unit off the base plate. With an older fan you may need someone to hold it, while you unhook the wires. Check the box with a non contact tester before you mess around inside. Look to see if there is a maintenance hook. Hang the fan there, if it is available. Unhook the wires and put the wire nuts back on.

You will likely have three, possibly four wires that are connected to the fan from the electrical box. If you have three wires, one will be a hot, the other a neutral and a ground wire.

If you have not already done so, you want to turn off the breaker that controls the power to the fan. Do not rely on just turnin off the switch. It is too easy for someone to accidently turn the switch back on.

If you have four wires attached to the fan then you have a separate switch for the light and the fan.

With the power off, you can safely unhook the wires at the connections. Place a wire nut on the hot wire(s) for safety, in case you need to turn the power back on before the new fan is installed.

Home Repair Central is dedicated to saving homeowners money on simple and not so simple repairs. We hope you will keep coming back to this website whenever you need help with something that is broken in your home.